It’s rather small and rather unimpressive, the Sonore microRendu Network Audio Adapter. Until you start listening! Be warned, watching this video might cost you!

It measures only 55 x 90 x 17 mm, holds a DC power in and LAN connector on one side and a MicroSD card slot and a USB A port on the other. The only thing it does is receive audio packets over the local network, recondition the data and send it out over asynchronous USB to a D/A-converter. Something any computer, including mini-computers like the Raspberry Pi, can do. But at a price of 640 US dollars you expect it  to do substantially better than a Raspberry Pi. Wel it does, big time.

The microRendu is a so called NAA, a network audio adaptor. Look at it as a remote connection point for your DAC. In stead of sending the audio data to the USB port of your computer, it is send to the Network Audio Adapter’s network input where it is translated to a USB output. There are many programs that can send audiodata to Network Audio Adapter’s but they might use all kinds of protocols. The microRendu supports the most popular ones and calls them output modes where in fact they are more protocol modes. It can function as a Squeezebox player, supporting true gapless playback of PCM and DSD over DoP or as an Airplay station that outputs gapless PCM. Since the Airplay protocol is limited to 48 kHz, that will be the limit here too. A third mode is aimed at the UPnP AV, DLNA and Open Home standarts. It supports two variants - DNLA output and MPD output and does gapless playback of PCM, DSD over DoP and native DSD. The fourth mode is for working with Signalist’s HQ Player and the fifth mode is the RoonReady Output also know as Roon Endpoint. That is an impressive versatility for such a small box. How difficult will it be to install?

The Sonore website holds a small user manual that starts with some remarks on the power supply that has to be bought separately. I used the new SBooster 5-6V BOTW P&P ECO, switched to 6V. An Audioquest Cinnamon USB to MicroUSB cable connected it to the Chord Hugo. By the way, I had some questions about the use of Audioquest Micro USB cables together with a portable DAC like the Chords or Celcus Sound since the plug is too big.  Have your dealer order an adapted cable that will fit the DAC better. Audioquest then trims down the microUSB and covers it in shrink tubing. But I digress. According to the manual I have to wait 45 seconds for the unit to boot and then go to the website sonicorbiter.com.

There you see what compatible players and servers are available in your network. Simply click on the Manage button to open the settings page of the microRendu. Choose the settings tab and you can choose the setup that suits your situation. 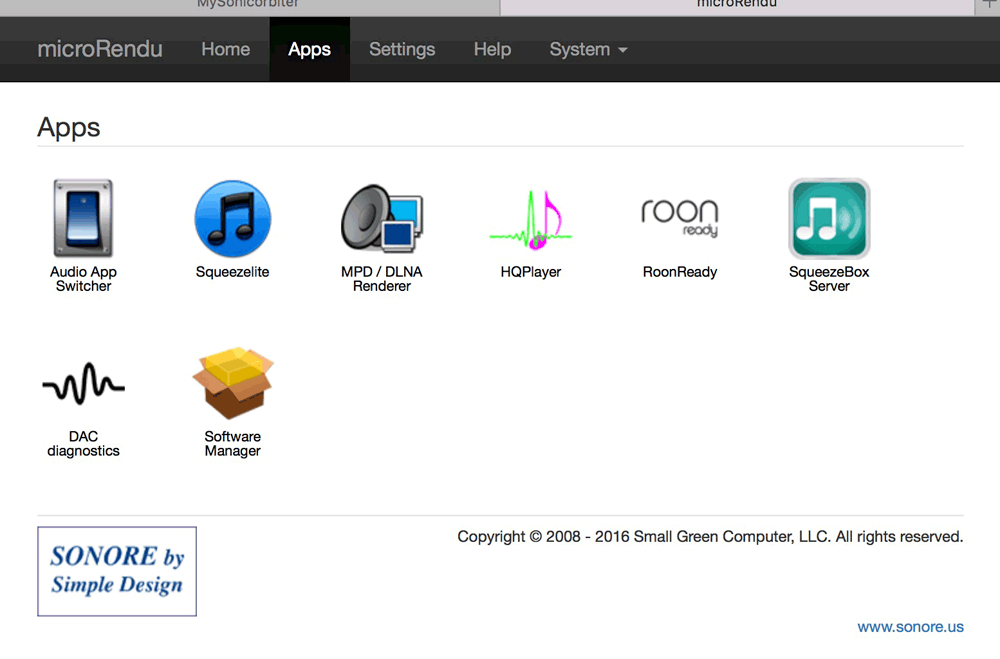 I chose  RoonReady here and in settings selected none at volume control and DSD over PCM support. After clicking Save changes, the microRendu appeared immediately in the audio setting in Roon. After giving it a name and checking the settings, I was ready to play! It took me two minutes, the most. To test out the other modes, I switched to Squeezelite and used Rune again to use it as a Squeezebox. Then I activated the DLNA mode, started up JRiver Media Center 21 and was directly able to play from JRiver! I don’t have a license for HQPlayer yet, so I was not able to test that mode. But given the ease and robustness in the other modes, I can’t imagine the HQplayer protocol would be less.