Apart from the Magna sticker and the S/PDIF output, the Magna Sonos looks no different than the standard Sonos. More importantly, it operates exactly the same as the original Sonos. Since the computer part of the player remains untouched, you’ll keep the robustness and operational speed of the Sonos system. It also means that sampling at 48 kHz and 16 bit is the max. Higher sample rates and 20 or 24 bit resolution are being cataloged but won't play. The other limitation is the number of tracks that can be indexed. Depending on the amount of metadata you store within music files (lyrics and album art take a lot of memory), you’re limited to 30,000 to 40,000 tracks, about 2300 to 3000 cd’s. For many this will be plenty, it's only the real fanatic that has more albums. As noted, these are the standard Sonos limitations and did not change by Magna's mod’s. 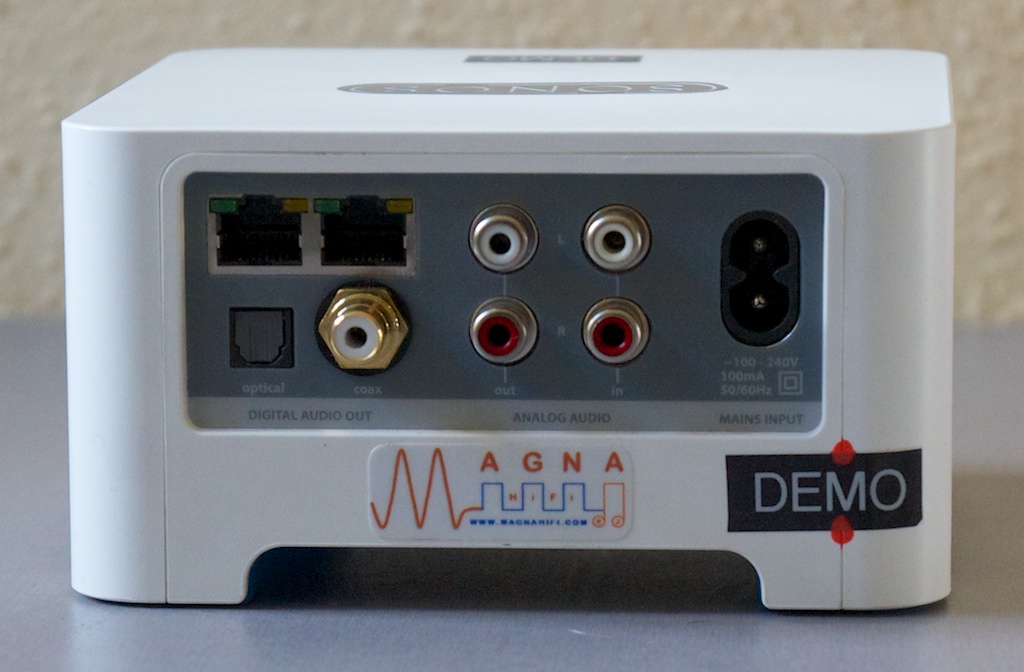 Given the enthusiasm with which the mod’s are promoted, I started right away listening using my top set, Set 1. As could be expected the Magna Ultimo Sonos sounded quite uninspiring right out of the box. Nasty sibilance, strangely unfocused lows and a claustrophonic stereo image. The Sonos has no power switch (which is good) and was left playing with the amplifier switched off overnight. The next day it started to become interesting but not yet magical. That took another two days. But it was worth the wait. The Magna Ultimo Sonos is very good. Very good indeed! The sibilance control was as good as I ever heard, which means jitter that effects this area was perfectly low. A good sibilance test is Famous Blue Raincoat by Jennifer Warnes (especially the original cd from 1991). The S-sounds will always be accentuated but can range from clear S’ses to sharp hissing all over the stereo image. The Magna Optima Sonos produced clear S’ses. The second thing I noted was the ‚Zen feel’ I also get from my Mac Mini/Jriver 19 combo. Some will call it analogue-like, ease, lack of tension and so on. Sound remains hard to describe and every subculture has its own vocabulary. The tonal balance overall is very accurate with only holding back slightly in the mid-low region (say 100 to 250 Hz). That might open up the lows somewhat on some sets (and some music), in Set 1 it tended towards ‚slender’ without lacking power. My own player is slightly meatier, which I like better. Mind you, we’re talking details here. I will check the effect on the two other test sets further on. The only significant difference with my own player was the stereo image. The Magna Ultimo Sonos has a more compact stereo image. Nice in focus but offering somewhat less air around the instruments and vocalists while portraying the acoustics of the venue was also less convincing. Not bad, surely not bad, but just less luscious than my own setup.

Time to go to Set 2. It was directly clear that there was a very good source connected. Here I could hear no difference between the MacBookPro/JRiver 19 combo (that

sounds identical to the Mac Mini of set 1), with the exception of the mid-low region. The little AE Compact 1 starts loosing the capability to provide power at about 120 Hz and the REL sub is set to ‚just’ support the low end to keep it musical. When the source is also slightly mean in the mid-low region, you will hear that, Especially with symphonic music, like the Dance Macabre (Minnesota Orchestra, Ejji Oue) on the Crystal Cable Arabesque CD. On the other hand, a recording like Cowboy Junkies Shining Moon (from the Whites of Earth Now MFSL album), that is shy in the mid-lows already, sounded fine. I was able to compensate for it by setting the low pass frequency of the subwoofer slightly higher.

Set 3 has about the same price as the Magna Ultimo Sonos so it is unlikely there will be people buying this player in combination with this set. Still, the main qualities of the player are still noticeable: the beautiful highs, the good sibilance and the ‚zen factor’ still are there, just less obvious.

Initially my plan was to borrow back the original Sonos ZP90 from my daughter but it soon became apparent that there was no need for a direct comparison. The difference is just too obvious.