Normally hifi components have cryptic names, composed of characters and numbers that at its best indicate where that product stands in the product portfolio of that manufacturer. The unusual name of this amplifier can tell you far more though. Marantz uses PM for all its amplifiers, so that’s no surprise. KI stands for Ken Ishiwata, Marantz own audio guru. Pearl refers to Ishiwata's Pearl jubilee (30 years, in 2010) at Marantz and Lite indicates that it is a slimmed down version of the limited edition KI-Pearl amplifier. According to Ishiwata the Lite versions of both the KI-Pearl amplifier and sacd-player were a response to the many requests he got for a more affordable Pearl set.

Despite the Lite moniker, the PM-KI-Pearl-Lite is anything but light, scaling in at slightly over 8 kg’s. Nor is it stripped from the essential Pearl building properties like the copper plated chassis, the double layered bottom plate and the double isolated toroidal transformer. Since I have no KI-Pearl for comparison at hand, it is hard to say what is lightened in the Lite, apart from the output power that went from 90W/8Ω to 70W/8Ω. The almost symmetrical front holds two large knobs. One is a motorized volume control, the other functions as input select. There are five line level inputs, amongst which two tape inputs, and a MM phono input. A row of led’s show which input is selected and whether mute is engaged. A number of small push buttons lets you select from two sets of loudspeakers, engage source direct and power amp direct. Source direct disengages the three band tone control beneath the buttons and power amp direct converts the Pearl-Lite to a power amp. The latter is ideal for people like me that use their stereo as L and R for their surround setup. I connected the L & R pre-out of my Arcam AVR600 to the power amp input op the Pearl-Lite and whenever I use the Arcam, the power amp direct on the Pearl-Lite was pressed (for 3 seconds). In this mode all remote control functions of the Pearl-Lite are switched off which was handy since the Marantz uses the same RC-5/6 IR codes as the Arcam. The rear holds gold plated RCA’s for all inputs plus a pre-out. A double set of well designed loudspeaker terminals accepts, bare wire, banana plugs and forks. The build quality is excellent and the looks are great. Highly polished wooden side panels add to the quality feel. 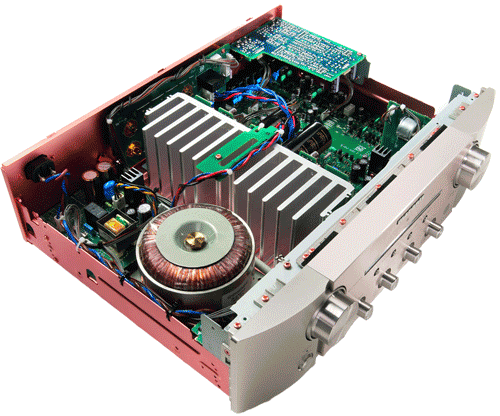